A BLOKE was savaged online after posting a video where he shamed his Tinder date for paying for the meal with coins.

Danny Duarte, who posts on TikTok with the handle @thewaterboy, met a woman online and they arranged to meet at the driving range for their first dat followed a second date at a restaurant a few days later.

Danny uploaded the short clip of himself on the second date to TikTokCredit: TikTok/@thewaterboy 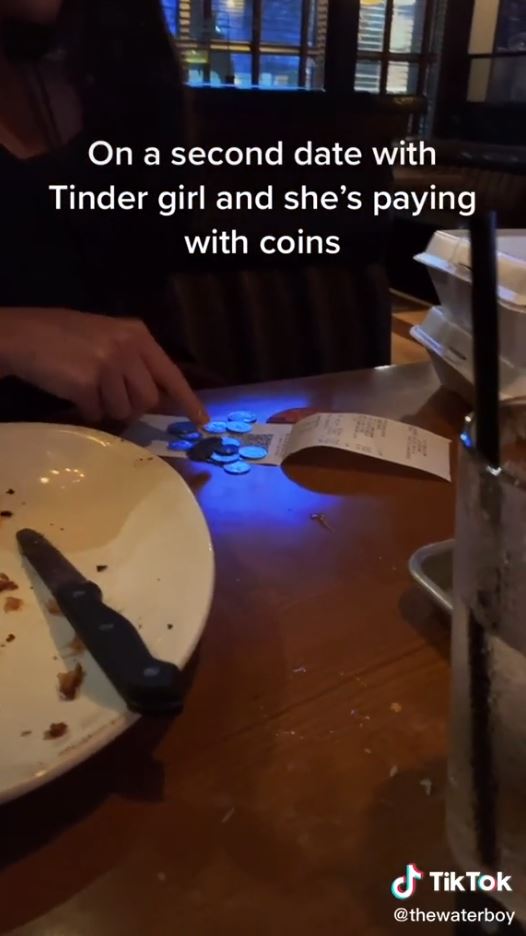 In the clip he shamed his date for paying with coins and showed her counting them outCredit: TikTok/@thewaterboy

When the dinner was finished, the woman took out her purse and paid for her part of the meal with coins.

Danny took exception to this so he whipped out his phone and recorded the conversation, later posting it on social media with the caption: “You can’t make this up.”

In the short TikTok video, Danny said: “On a second date with Tinder girl and she’s paying with coins. I decided to go out with her again and she does this. You can’t make this up!”

In the clip Danny records himself stroking his beard, before flipping the camera to show the woman counting out her coins and checking the bill.

One said: “You should be embarrassed for letting her pay.”

A second said: “So you choose humiliation over support? Show your true colours…”

While a third agreed: “She should take this as a sign that he’s okay with watching her struggle and not helping. Red flags.”

In other news, this mortified woman was sent a nude pic by her gran who said it was “meant for Brian.”

And this TV reporter caught her boyfriend cheating after spotting unusual “physical activity” on his FitBit at 4am.

Plus proud “catfishes” are showing off incredible transformations which have blokes drooling… then darting in the other direction.